http-flv(HTTP FLV live stream) means delivery live stream in flv(flash video) format by http. It's a very common method to stream media seen in China because it has the advantage of low latency found in rtmp and easy delivery due to the use of http. For server side, rtmp stream is converted into flv because rtmp is almost the only method used to push stream now. For client side, playing flv stream is the same as playing flv video from a static server. Of course, a player that supports flv is needed.

I am going to talk about video delivery methods → streaming → http-flv. And some skills about how to play flv will also be involved for debugging purposes. Video encode method such as H.264 is beyond the scope of this article.

Comparison between http-flv and other video delivery methods

A progressive download is the transfer of digital media files from a server to a client, typically using the HTTP protocol when initiated from a computer. The consumer may begin playback of the media before the download is complete.

multimedia that is constantly received by and presented to an end-user while being delivered by a provider.

Live streaming is a special case in media streaming:

online streaming media simultaneously recorded and broadcast in real time to the viewer. It is often simply referred to as streaming

such as HLS, Dash

besides RTSP/RTMP Streaming and Adaptive HTTP Streaming, http-flv is an unofficial protocol widely used in china.

This is a view of douyu(斗鱼) which is the most popular live website in china. 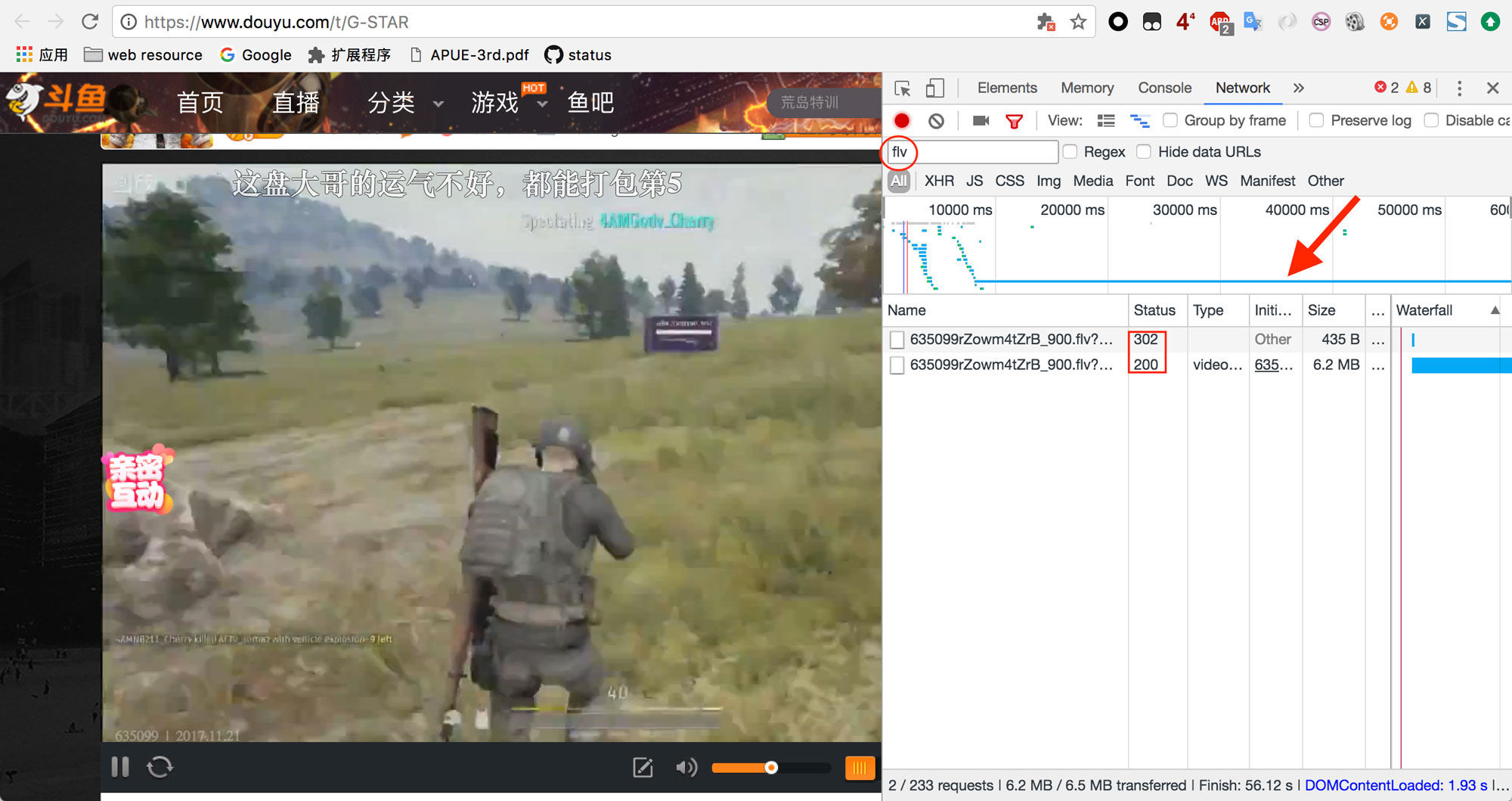 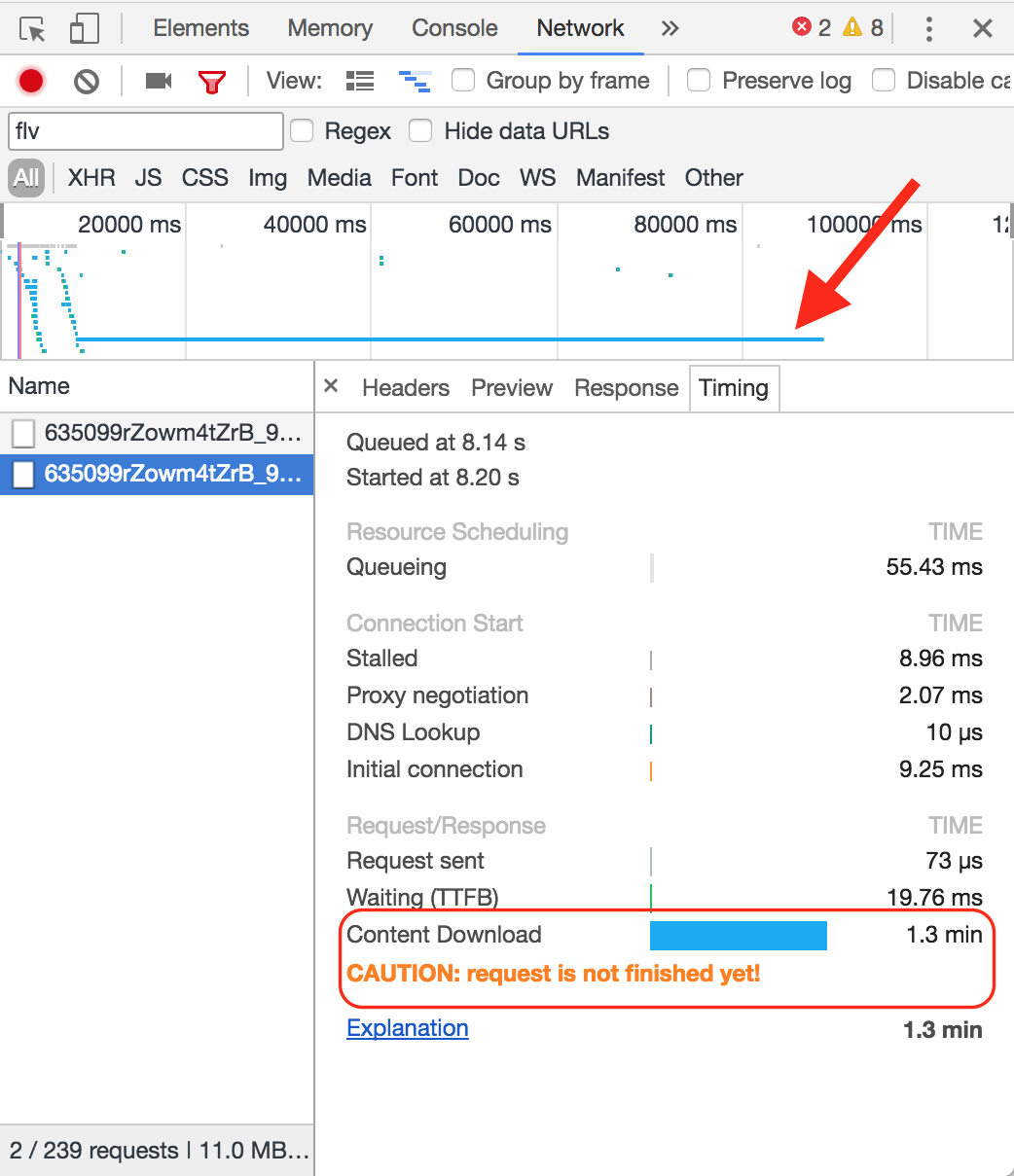 The distinctive character of http-flv is that there is a long connection with suffix of .flv. Generally speaking, a live website tends to use various streaming methods in different lines because there is no method that can fit all platforms and all application scenarios very well.

Difference between the 3 most common streaming methods:

Here we focus on http. Content-Length header in http response indicates the length of body in bytes. HTTP clients will receive the specified length of data after parsing headers. There are 2 special cases where no Content-Length is provided:

. Since chunked encoding is introduced from http1.1 so the latter can only be used in http1.1. The typical response headers of a http-flv request is like this:

so the server side is responsible to set at least the following response headers:

RTMP is aTCP-based protocol protocol designed for streaming video in real time. I am going to clarify some concept in rtmp protocol:

FLV is the simplest video containing format. A flv video file consist of a header and a series of tags. A tag also has header and body. The header of a tag indicates this is a video or audio tag or script tag and what codec is used to encode the video or audio. The body of a tag is a frame of video or audio or other meta data. The video tags and audio tags are interleaved. This makes it possible to play the video from any point in a flv file.

When we push rtmp stream by flv format, the payload of a video/audio rtmp packet is the same as a flv video/audio tag body. It's obvious that the task of server side is:

The response body of http-flv request is just like a normal flv video. The server side sends the http response headers followed by the flv header(a constant in most cases). Then the server sends the tags generated simultaneously while receiving rtmp packets.

Most players that can play flv videos are able to play http flv live streams. It's a pity that apple doesn't support it because Jobs hated it.

As far as I know, http-flv is mainly used in PC web live.

Make sure to restart server before load tets.

It shows this simple server can handle 100 streams at the same time.

we are talking about http-flv here, but flash/flv has many disadvantages so that it's not supported by apple even adobe has given up developing it. Html5 is replacing flash and mp4 is replacing flv. The abandon of flash has achieved great progress in countries except China. So that, mobile browsers do not support Flash, and modern desktop browsers make it increasingly difficult to use Flash or disable it by default. However, is mp4 suitable for live streaming? No, because mp4 is not seekable. The biggest advantage of flv is that it's a seekable which means it can start to play from any position in the file. That's why there's no http-mp4. That's why when we use ffmpeg to push rtmp stream, we should specify format as flv(-f flv). In a word, flv is still the main container format used in live streaming so far. But it will be replaced some day.