The first step of any machine learning method is to represent an instance as an unordered bag of features (i.e. a set of attribute value pairs).

There are 3 types of attributes. Compared with categorical attributes (e.g. yellow, blue, green, red), ordinal attributes (e.g. poor, satisfactory, good, excellent) have a natural ordering and are meaningful to compare. So, one-hot encoding may be required to convert a categorical integer feature into several binary columns, each for one category. Numeric attributes (e.g. 1, -3.14, 2e-3) can be added or multiplied. They are usually normalized to have unit variance or be in the range of [0, 1].

The representation of each datapoint is critical for the performance of machine learning algorithms. The process of picking attributes is also called feature engining.

When it comes to images, text and time series, attributes are not obvious.

For handwritten digits recognition, each pixel can be used as a separate attribute because the same pixel has the same meaning after each digit being isolated, rescaled and de-slanted. As for recognizing an object in an image, using pixels as attributes doesn’t work. A possible approach is to segment the image into regions and then extract features describing the region.

Bag-of-words (sparse vector in implementation) combined with naive bayes classifier is commonly used for text classification, such as spam detection and topic identification.

Music (a kind of time series data) can be decomposed by Fourier transformation into a sum of sine waves of different frequencies and then attribute values are weights of different base frequencies. This representation is insensitive to shift and volume.

Most machine learning algorithms have hyperparameters to control the flexibility. They should be tuned to minimize generalization error.

The common methodology of evaluating a model is as follows:

What metrics do we use to measure how accurate our system is?

Accuracy is not enough because it cannot handle unbalanced classes. For example, we are predicting whether an earthquake is about to happen. A predictor which always says no will have very high accuracy but doesn't help.

Nauve Bayes predicts class label by applying Bayes rule with independence assumption between features. It's naive because this assumption may not be correct.

There are 2 types of NB classifiers.

NB can easily handle missing value by just ignoring it for some attribute based on conditional independence assumption between attributes.

The algorithm used to build decision tree is called ID3:

RF is the state-of-art method for many classification tasks.

Linear regression assumes y is a linear function of all attributes.

Fit the data when there is only one feature 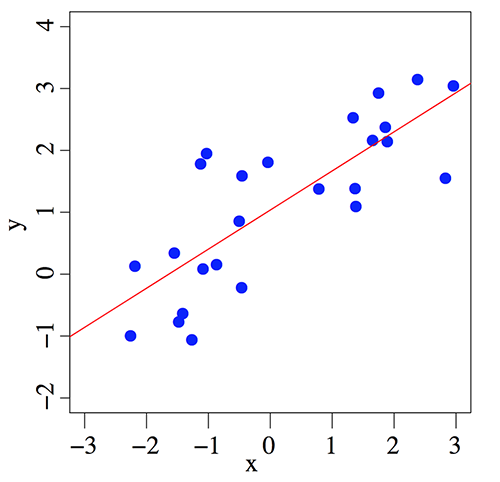 With more features, the fitted model forms a plane or hyperplane instead of a line.

Loss function is square error . To minimize the loss function with respect to parameters W, linear regression has an analytical solution.

Actually, linear regression is more powerful than you would expect.

Be careful that too many new features might result in overfitting.

It's a classifier in fact though the name is quite misleading.

As shown in the figure below, the feature space is divided into 2 regions by the decision boundary and each region corresponds to a class. 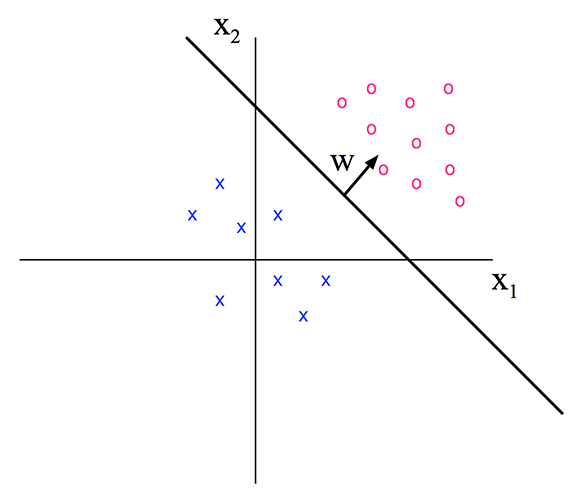 So far it's quite similar to linear regression but notice that the y-axis in the figure above is feature x2 instead of target value y. In a 2 classes case, assuming the red circle represents class 1, y=1 if f(x,w)>0.

In order to model the probability P(y = 1|x), sigmoid/logistics function is applied to squash f into [0, 1].

Parameters W are determined by maximizing the log likelihood (equivalently, minimizing the negative log likelihood) using numerical optimization algorithm such as gradient descent. Assuming the dataset D is independent and identical distributed, the likelihood of the training data is

Gradient descent iteratively moves to the minimum of error surface on weight space by subtracting a proportion of the gradient of E with respect to weight parameters. The pseudo code for batch gradient descent is as follows:

For multi-class classification, we use a separate weight vector for each class and output the probability using softmax instead of logistic function.

Like logistic regression, Support Vector Machine (SVM) draws a decision boundary or hyperplane in the feature space but with different objective function. SVM maximizes margin + slack. Margin is the distance from the closest training point to the decision boundary. . slack variable is the distance from a point to its marginal hyperplane. It's introduced to deal with non-separable data but also applicable for a separable data set.

The optimization problem is to minimize . The solution looks like . The hyperplane is only determined by just a few datapoints (support vectors). Prediction on new data point x is

Plain SVM is a linear classifier. Like logistic regression, SVM can also be made non-linear by using basis expansion which is implemented in kernel trick. Non-linear transformation makes data more separable. kernel makes it easier and faster to compute with if the expanded feature space is high dimensional (even infinite). Prediction is now . So, we don't bother to calculate . For example, for 2-d input space,

Combined with kernels such as polynomial and RBF, SVM has achieved good empirical results in many tasks.

K Nearest Neighbors (KNN) uses intuition to predict a new test point X: output the value of the most similar training example. It's simple because it doesn't make assumption about the data and let the data "speak" for itself instead.

KNN method can be used for both classification and regression.

choosing the value of K

The distance defines which examples are similar and which aren't. Common measures are:

What if there are equal number of positive and negative neighbors?

A reasonable choice is to fill in with average value of the attribute across entire dataset.

However, both K-D tree and locality-sensitive hashing have the problem of missing neighbors.

K-Means is an unsupervised clustering algorithm which produces polythetic, hard boundary and flat clusters. K-Means splits data into K sub-population where membership is defined by the distance. The algorithm goes like this:

KMeans minimizes the aggregate intra-cluster distance (sum of squared distance between each datapoint and its centroid ) in each iteration until convergence. Different starting points will result in different minima. The solution is to run several times with random starting points and pick clustering that yields the smallest aggregate distance.

K must be explicitly specified as the input. We specify K=10 for clustering images of handwritten digits. What if we don't know how many clusters there are in the data? Aggregate distance is monotonically decreasing with K. Usually, we plot the aggregate distance against the value of K (this is called screen plot) and visually pick K where the mountain ends and rubble begins (make aggregate distance decrease the most).

Evaluation for clustering algorithm is not easy. If class labels are available, we need to align clusters with classes before measuring accuracy.

Otherwise, we could sample some pairs and ask human whether they should be in the same group or not. Sample pairs can also be generated from class labels. By counting matching (TP, TN) and non-matching pairs (FP, FN), we can compute accuracy, F1, etc.

Inspired by bag-of-words, an image can be represented by a bag of visual words.

Suppose the distribution of our data (1-d) looks like 2 mixed Gaussian function, Gaussian mixture model can help us automatically discover all parameters for the 2 Gaussian sources.

Mixture model is a probabilistically-grounded way of doing soft clustering. Each cluster follows a Gaussian (continuous) or multinomial (discrete) distribution. Mixture Model is also called expectation maximization because the convergence goal is to maximize the log likelihood of data (expectation).

Assuming the dataset is iid, the likelihood of n training examples under the mixture model of K sources is

Let's walk through the 1-d GMM example mentioned above.

EM has the same problems as K-Means.

Agglomerative is a bottom up clustering algorithm which yields a hierarchical tree of clusters.

How do we compute the distance between 2 clusters?

Datasets are typically high dimensional such as images represented by pixels. True dimensionality is usually much lower than observed dimensionality because there are correlated or redundant features. High dimensional dataset is sparse in the feature space which makes statistics based methods unstable to predict. Dimensionality reduction helps to dramatically reduce the size of data and speedup computation. It also allows estimating probabilities of high-dimensional sparse data.

PCA represents an instance using fewer features which explains the maximum variance in the data.

We pick K eigenvectors (they are called principle components) associated with the largest K eigenvalues (variance) as new dimensions.

Given a new instance, we project it to these new dimensions to get a lower (K<<D) dimensional representation. That is, we compute dot product between the new instance and each principle component to get a vector of new coordinates.