It is a common sense that cipher algorithms should be made public because open design allows a system to be scrutinized by many users, white hat hackers, academics and thus allows early discovery and correctness of flaws/vulnerabilities.

A cryptographic scheme is secure under some assumptions, that is against a certain type of attacker:

Consistency is due to the associative property of XOR.

Perfect secrecy: for all messages of same length and for all ciphertext : where is some negligible quantity.

Stream cipher makes OTP practical by using a pseudorandom key rather than a really random key. The key is generated from a key seed using a pseudo-random generator (PRG): .

Below are 2 specific PRG and some week stream ciphers based on them. 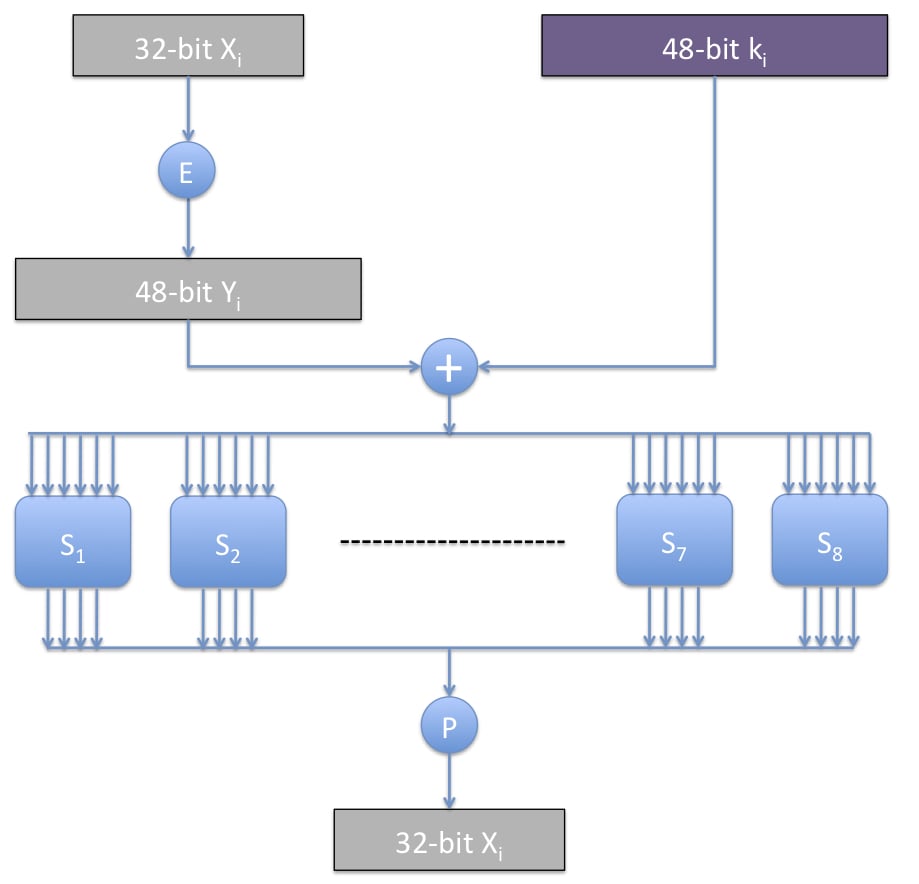 Each Feistel round is invertible. However, the function f or is not invertible because it maps 6 bits to 4 bits.

DES is not secure:

Secure but 3 times as slow as DES:

Each round consists of the following 4 basic steps (at the last round, MixColumns is not applied) and each step is invertible:

Although existing attack on AES-128 is not practical, it's still recommended to use AES-192 or AES-256 instead.

What if the length of message M is not l?

M is padded: such that

There are various ways to use block cipher known as modes of operation.

Each PKC algorithm is based on some intractable problem.

Block of bits are viewed as large numbers. Arithmetic operations are applied to these numbers to perform encryption and decryption. All operations are followed by Modular n to ensure the result is a value in .

Corollary: prime p, is a cyclic group, i.e., where g is said to be a generator

is the inverse of , denoted , if

correctness proof is based on number theory mentioned above: [todo]

security is tied to the following 2 hard problems:

However, raw RSA is not secure against chosen plaintext attack. The recommended ISO standard combines asymmetric and symmetric encryption and hash function together: 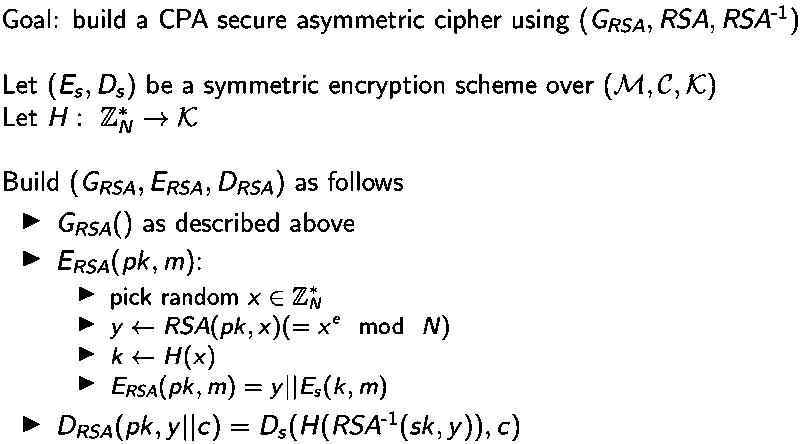 Besides, RSA is homomorphic which means it's vulnerable to forgeability.

Algorithm is as follows: 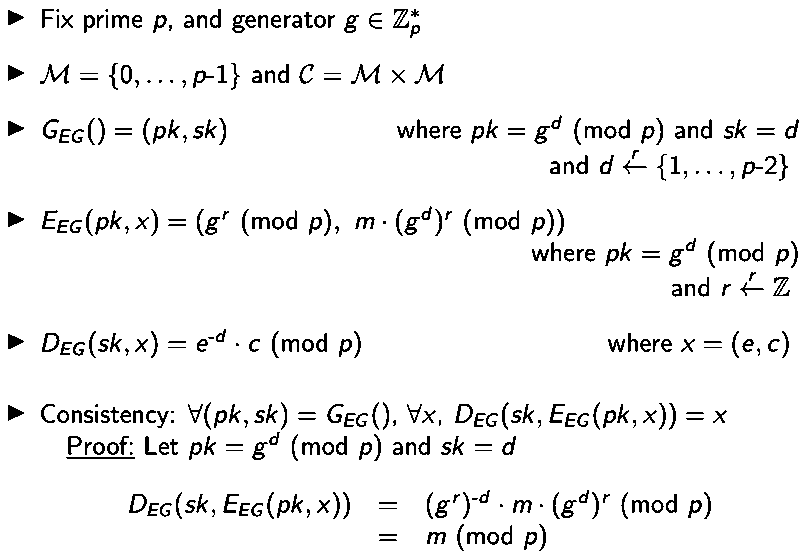 Comparison of symmetric and asymmetric encryption

Besides asymmetric cipher like RSA, some protocols below are also able to establish a shared secret key.

DH key exchange protocol is not a PKC but aims to establish a shared secret key instead. 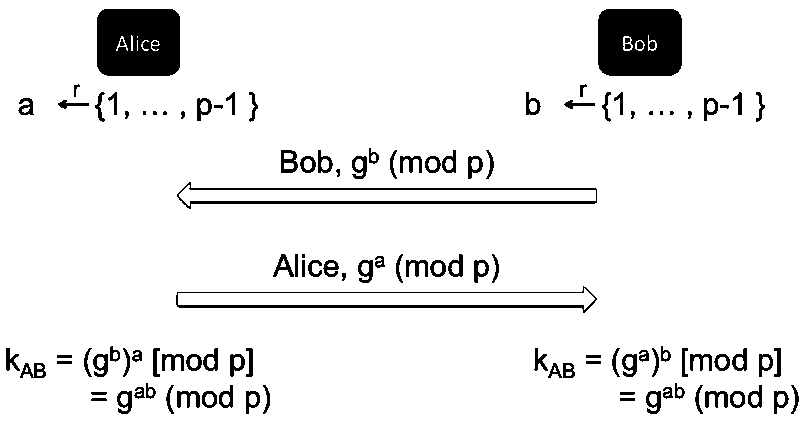 security is based on: 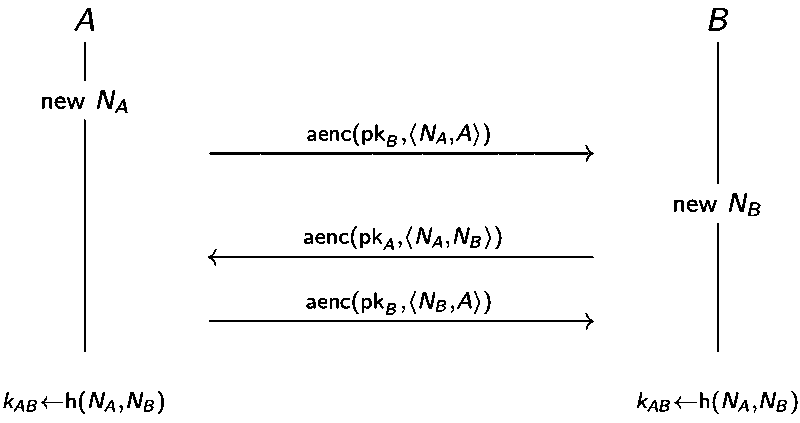 Attack found 17 years after the publication and its corresponding fix: 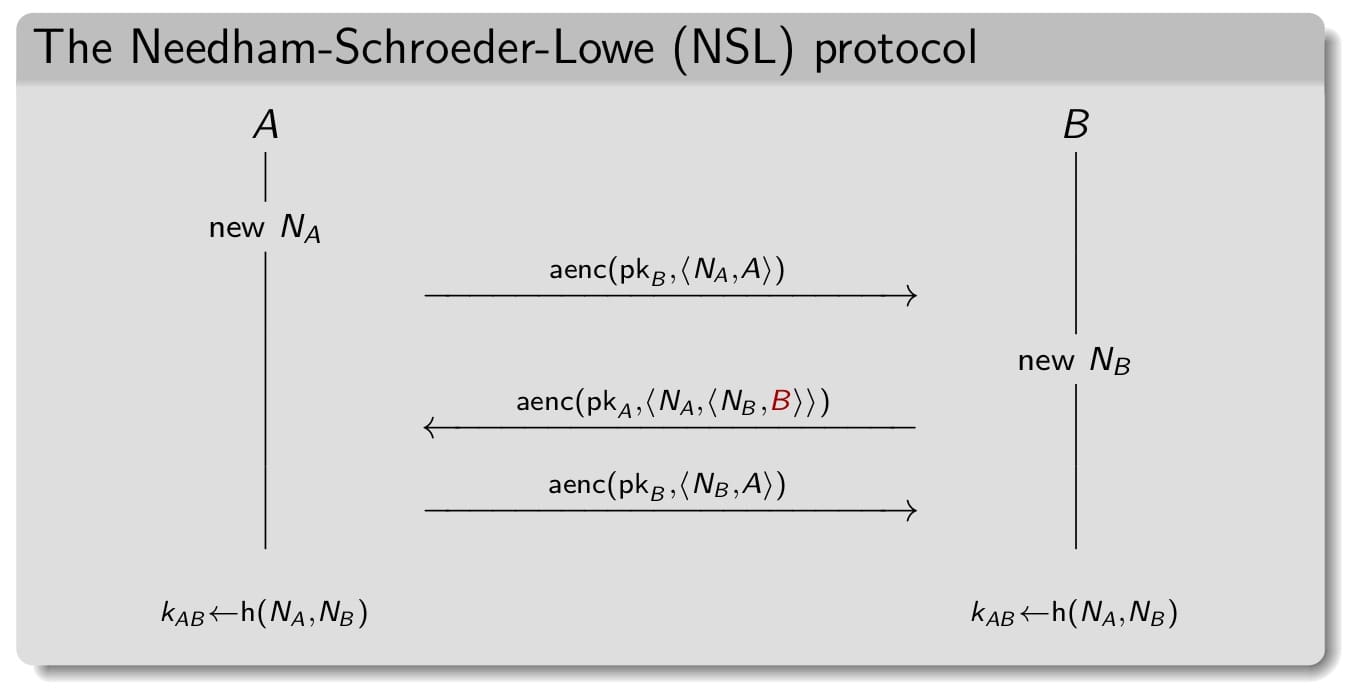 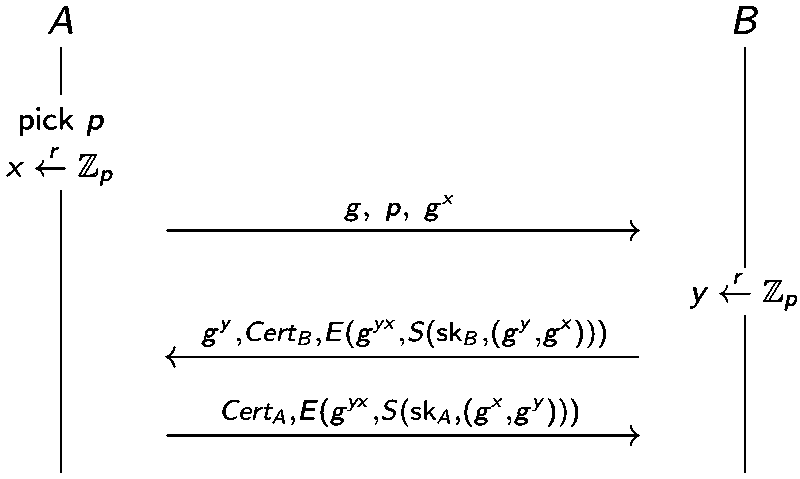 It is similar to DH but also relies on the certificate and signature to avoid MitM attack.

The Basic Access Control protocol is the key agreement protocol implemented in e-Passports. 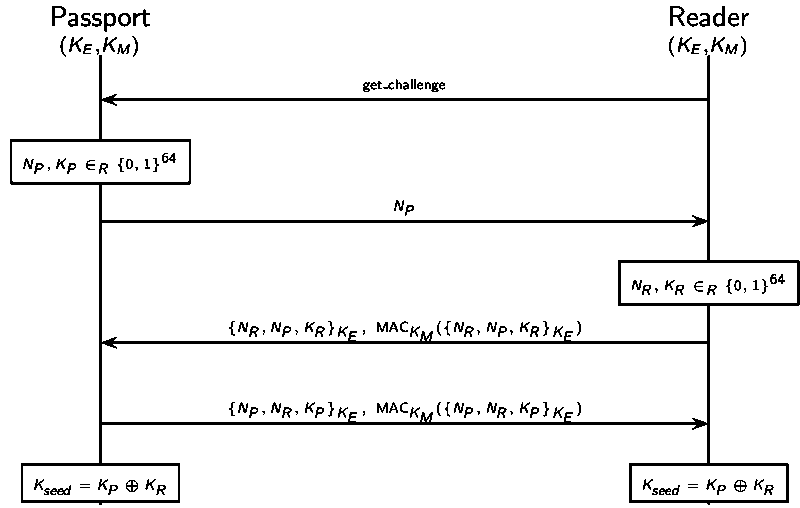 The e-Passport is embedded with a RFID tag which contains the information printed on the passport. The reader can read the secret keys directly from the passport. Subsequent communication is done through RFID, which might be intercepted/recorded by an attacker and used to perform replay attack later.

The problem is that the passport must reply to all received messages and indicate mac_err or nce_err on error. 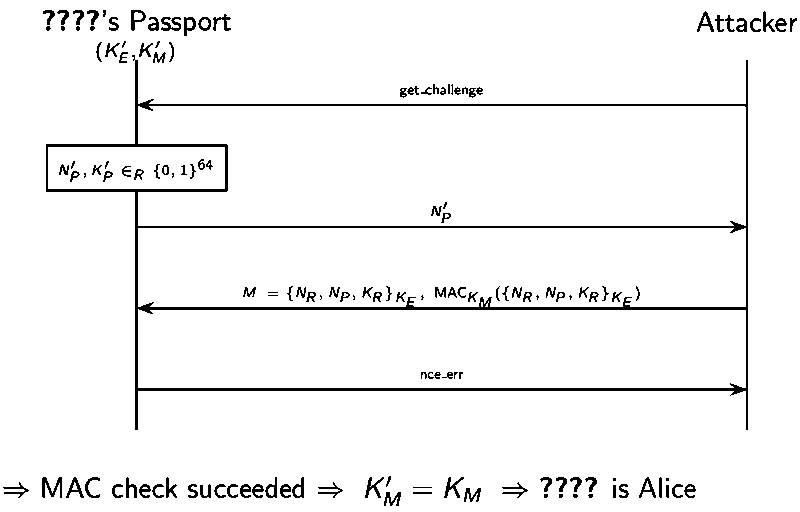 Timing attack is also possible based on the fact that failed MAC check is rejected sooner.

Hash function can produce a compressed digest of a message. That is, it is a mapping from a message of arbitrary length to a fixed-size binary string. It has the following properties:

compression function h is usually built from a block cipher and the details are omitted here.

Theorem: Let H be built using compression function h under the MD construction. If H admits a collision, so does h.

Birthday attack is a kind of attack aimed to compromise the collision resistance based on a nonintuitive phenomenon that states:

if there are more than 23 people in a room, there is better than 50% chance that two of the people have the same birthday.

It implies that there is 50% chance to find a collision in time . Therefore, A hash function with 256-bit output value has 128-bit security.

Message Authentication Codes is another way to ensure message integrity as well as authentication.

When do we use MACs?

A digital Signature is a way to demonstrate authenticity using public key cryptography.

Digital signature schemes are usually applied to cryptographic hashes of messages, not the actual messages for practical and secure reason: 1. more efficient 2. unforgeability.

A user may use a service without disclosing the user's identity

Anonymity can be achieved by hiding one's activities among others' similar activities.

Let's consider a general scenario, the sender wants to broadcast a message within a group of size n:

randomly route the request through a crowd of users. 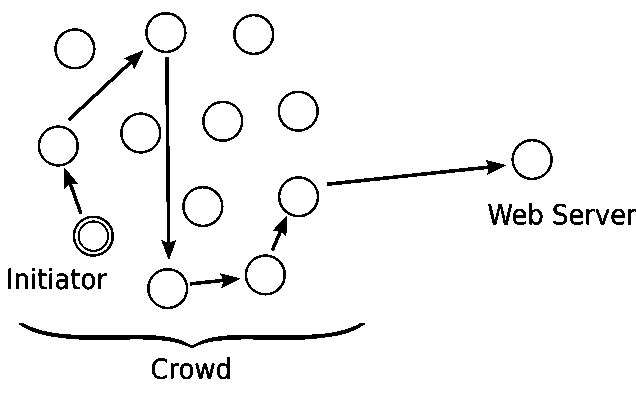 An initiator that wants to request a webpage creates a path from him to the server:

Limitation: not secure against an attacker that sees the whole network traffic 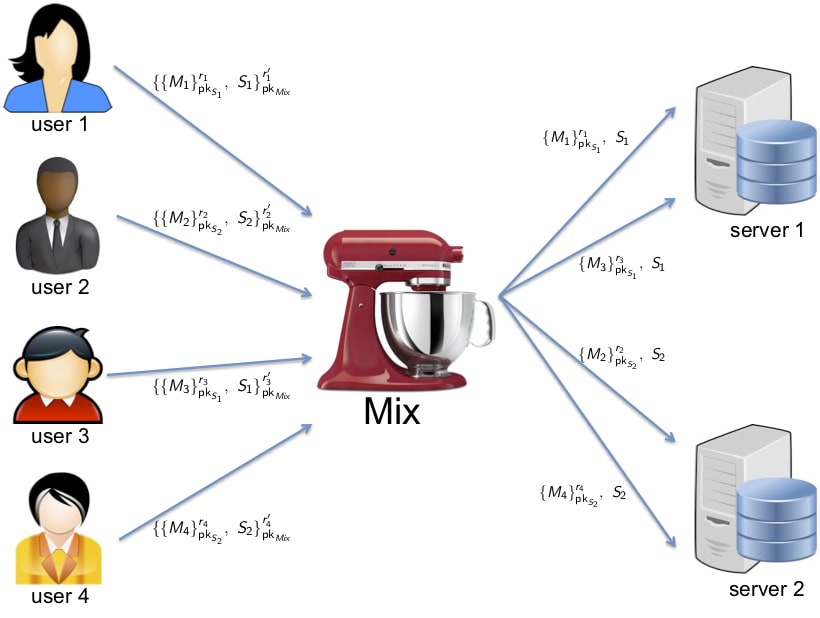 Messages can be sent through a sequence of mixes (Mix cascade). A single honest mix can guarantee anonymity against an attacker controlling the whole network if it applies the following measures to avoid time and volume correlation attack:

Onion routing combines advantages of mixes and proxies. An example of onion routing is Tor browser: 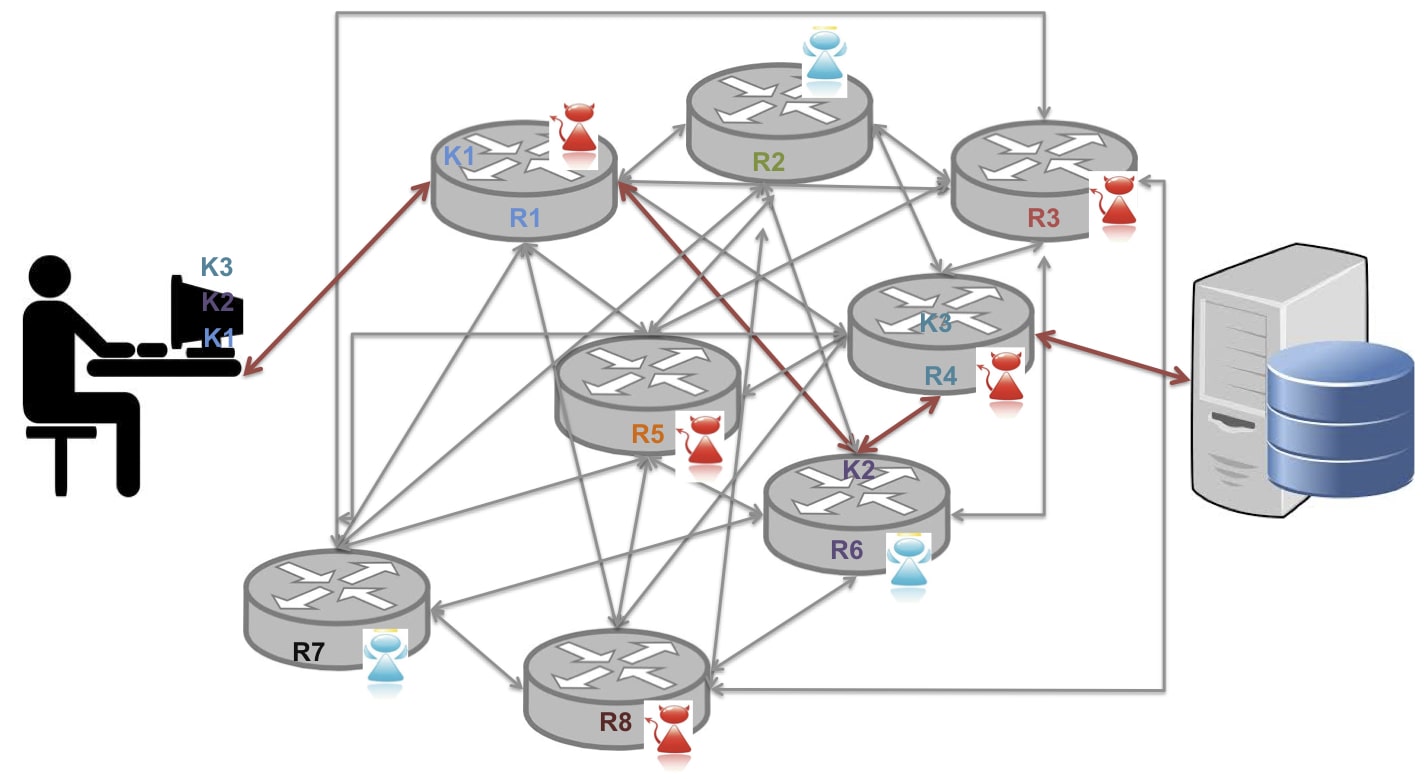 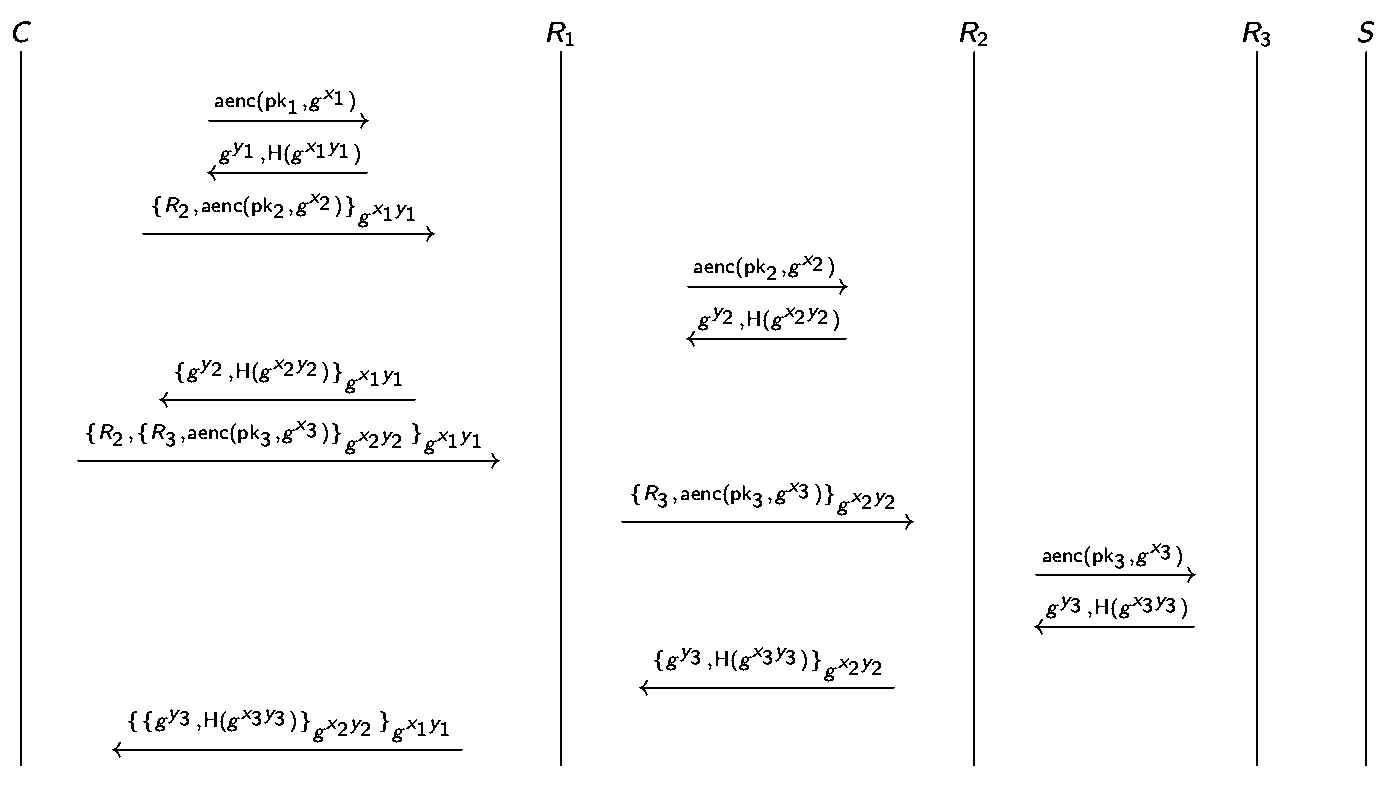 Limitation: not secure against end-to-end timing attacks, i.e., if the attacker can see both ends of the communication channel, he can correlate volume and timing information on the two sides.