The goal of computer security is to protect assets on computer systems against attack. We need to understand how attacks are performed in order to combat with attackers. Some common attacks are presented in this article, such as DNS poisoning, DOS, stack overflow and XSS.

What is security? Security properties: CIA+AAA 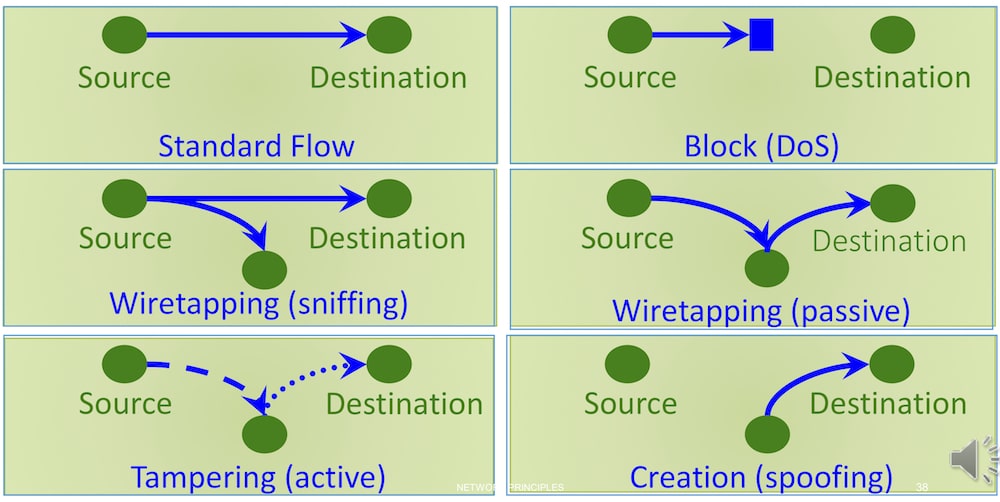 I will cover the basic knowledge of networking and then present some well-known attacks.

The network communication is characterized by 3 fundamental principles:

Ethernet refers to both the physical media used and the link layer protocol standardized as IEEE802.3.

Each network device, specifically interface, is identified by a MAC (Media Access Control) address: 48-bit with the first 3 octets are organization identifier.

Both hub and switch connect multiple devices together and operate at the link layer.

Hub: each frame received is duplicated and broadcast to all the machines connected on the same network segment. Random wait strategy is adopted to avoid collision. Problems: a large amount of unnecessary traffic and eavesdropping.

Switch: learns the MAC address of the machines that are connected to its various ports/interfaces and forwards frames only to the destination devices (broadcast if the MAC addresses are unknown).

Address Resolution Protocol (ARP): a link layer Protocol that determines the MAC address associated with a given IP address.

How does ARP work?

The source machine needs to know the MAC address of the destination machine.

What is ARP spoofing/ARP cache poisoning?

The attacker pretends to be the gateway and establishes a man-in-the-middle between the target and the gateway. This kind of attack leads to eavesdropping, such as sniffing passwords, or even tampering the traffic.

Internet Protocol is a network layer protocol that performs a best effort to route data packet from a source node to a destination node in the Internet. A node is identified by an IP address (32-bit in IPv4, 128-bit in IPv6).

How does IP packet routing work?

Any host employs a simple algorithm for routing outbound packets:

gateway/router: given the destination IP address, delivers to the destination machine in one of its LANs or forwards to a neighboring router using a routing table. A TTL field in the IP packet can deal with routing loop. The Internet is partitioned into clusters called autonomous systems (AS). Routing within an AS is done using shortest paths (OSPF) whereas routing between multiple ASs is determined by contractual agreements (BGP).

Internet Control Message Protocol is used for network diagnosis, such as testing if a host is alive (e.g., ping) or finding the path to a target host (traceroute).

Both TCP and UDP support concurrent applications on the same host by using ports (16-bit) of which 0~1023 are reserved for known protocols.

This section will focus on the most commonly used application protocols: DNS and HTTPS.

URL describes the location and access method of resources on the Internet.

DNS Maps (many to many) domain names to their corresponding IP addresses based on distributed databases on name servers organized in a hierarchical way.

Each name server stores a collection of records. Main record types include:

Pharming: An attacker causes requests for websites to resolve to false IP addresses of his malicious servers.

Phishing: resolve a domain to a web site that appears identical to the requested site, but is designed for a malicious intent, like grab passwords.

Clients/Resolvers (OS or application) and lower lever name servers cache records that are results of queries.

DNS cache poisoning tricks a name server into caching a fake DNS record. Any clients of the name server issuing DNS requests for the poisoned domain will be redirected to the attacker's IP address.

A DNS server is vulnerable to DNS cache poisoning probably because it:

TLS is an intermediate layer between transport and application layer and handles encryption, integrity and authentication. 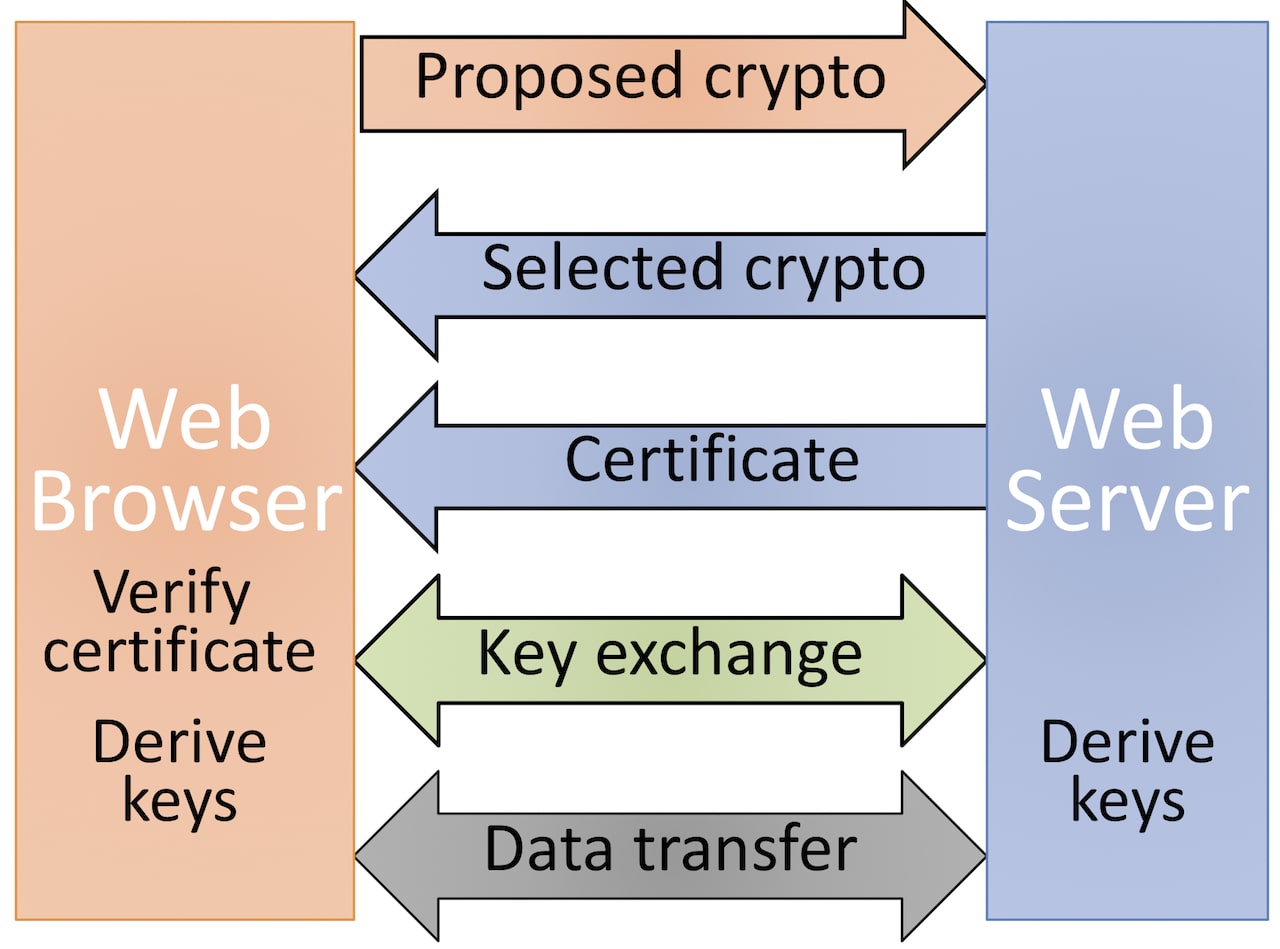 Authenticity of the server is implemented by certificates which form a chain of trust. A certificate includes at least the following information:

There is no efficient way to break HTTPS although some attacks exist such as LOGJAM aimed at signed DH and padding attack aimed at RSA.

Firewall, usually deployed in a router, is designed to prevent unauthorized access to a private network based on a predefined set of rules.

Each rule can specify

The set of rules can be blacklist or whitelist.

IDS (Intrusion Detection System) can detect a potential incident/attack in progress whereas firewalls are preventative. If an IDS detects an intrusion such as port scanning or DOS, it sounds an alarm so that the admin can react to a possible attack.

Most IDS incorporate the two methods below:

The layout of memory for the code above is shown below: 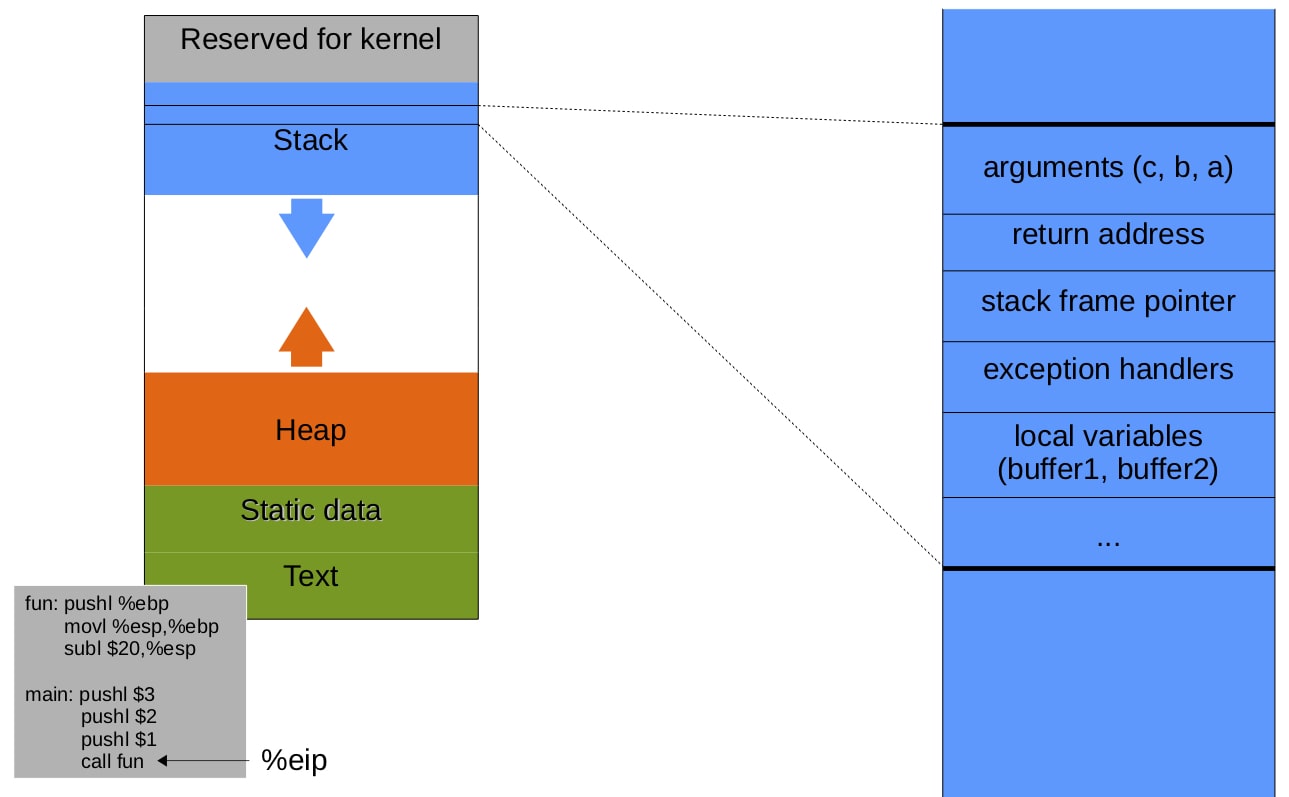 The stack consists of frames. Each is associated with an active function call.

Stack Overflow attempts to change the flow of execution by overwriting the return address to point to malicious code loaded onto the stack or known lib functions. As illustrated below, it occurs when the program blindly copies the user input to a buffer which is smaller than the input and, as a result, overwrites local variables adjacent to the buffer in the memory. 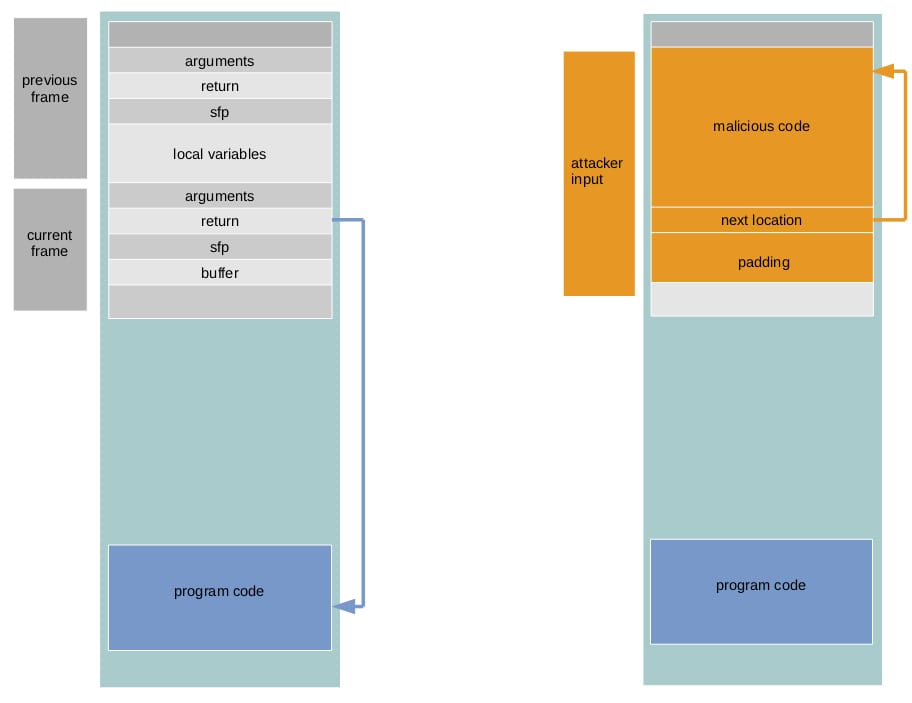 Challenges for this attack 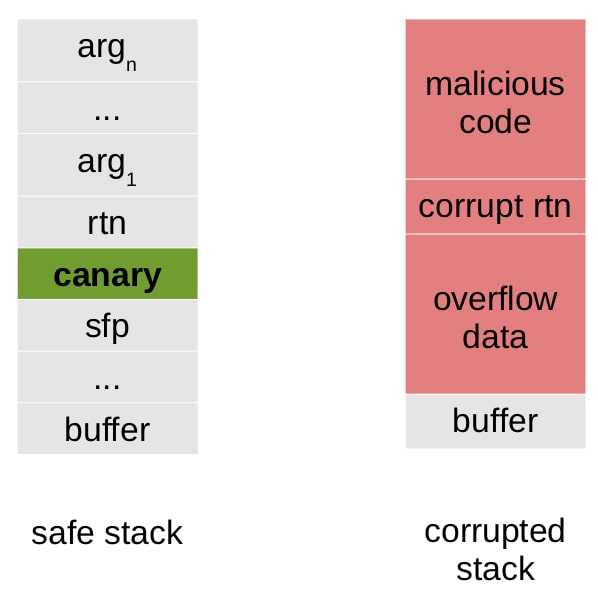 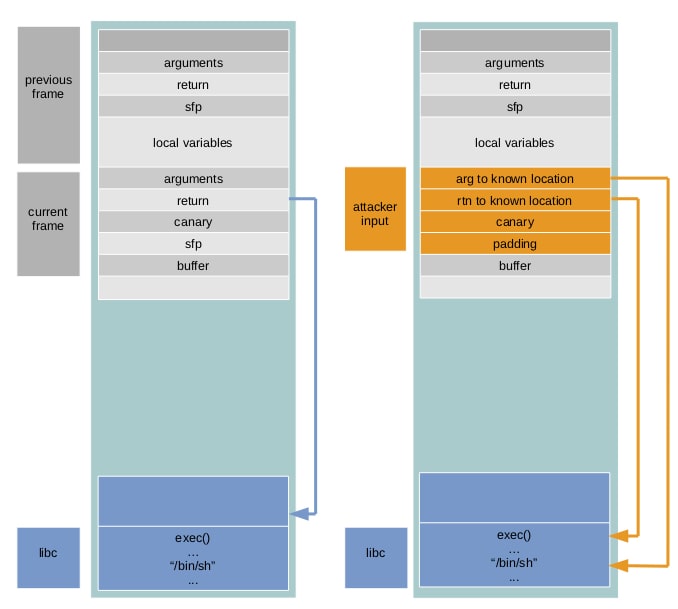 The representation of integers in a 32-bit architecture:

An example of arithmetic overflow is shown below where the output is 0x0:

If an attacker is able to provide the format string which controls the behavior of a format function, he can view the stack memory:

or even write to any stack location:

To prevent this attack, programmers should always provide format strings:

How should passwords be stored? hash of password with random salt: hash(pwd||salt)

Advantage: protect against frequency analysis and precomputed table attack because every password has a different random salt and even identical passwords will have different hash values.

This section will cover 2 types of attack in the web world: injection on server side and session hijacking in the client side.

Injection attack occurs when untrusted input data is used as part of a command or query resulting in executing unintended commands or accessing/manipulating data without authorization.

Consider a service that prints the result from the command whois. An example URL is http://www.example.com/content.php?domain=google.com and the implementation of content.php might be:

Being invoked with the argument www.example.com; rm * 􏱆will result in the following PHP

A web server logins user if the user exists with given username and password.

An attacker can Login (bypassing authorization) as admin via URL http://www.example.com/login.php?user=admin'#&pwd=f

Two main approaches to maintain Session (to remember a user or shopping cart):

Sessions can be hijacked in 2 different ways:

Cross Site Scripting: improper validation of input allows malicious code to be injected into the vulnerable site and to be executed on a victim's browser.

There are two categories of XSS attack:

1. Stored XSS attack: the malicious script is stored in the vulnerable site, like DB

Consider a guestbook where users can leave comments

If the sign.php script on the server simply copys whatever the user types in the form, like code below: the guestbook page might look like this: If anyone visits the page containing the attacker's comment, the malicious code would be executed.

The malicious code above is harmless. However, it can steal a user's session ID:

2. Reflected XSS attack: malicious script is sent by the victim and then reflected off the vulnerable site

Consider a search page that echos the search query, the results page of http://victimsite.com/search.php?query=security might contain a line: Search results for security

An attacker can construct a malicious query like this:

On clicking this link, the victim's cookies on the vulnerable site will be sent to the attacker's site.

The root cause is on the server side: failure to sanitize input provided by a user.

Cross-Site Request Forgery: a malicious website causes a victim to unknowingly execute commands on a vulnerable website which the victim is currently authenticated to.

Suppose an innocent user handles banking online at www.banking.com. This user may stumble into a site www.evilsite.com that contains malicious JavaScript code below:

The victim's browser would redirect to the victim's bank and attempt to transfer $10000 from the victim's account to the attacker's account. This attacker would be successful if the victim was previously authenticated to the bank's website e.g., using cookies.